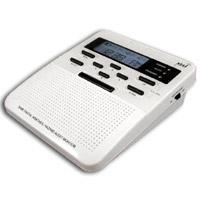 NOAA Weather Radio (NWR) is a nationwide network of radio stations broadcasting continuous weather information direct from a nearby National Weather Service (NWS) office. NWR broadcasts forecasts, watches, and warnings issued by the NWS. NWR may also broadcast warning and post-event information at the request of local and/or state officials. Non-weather types of alerts might include natural (such as earthquake activity), environmental (such as chemical releases or oil spills), or AMBER alerts.

Waseca County Emergency Management recommends each home and business should have an “All Hazards Alert Radio”. This type of radio can trigger an alarm tone and/or indicator based on signals received from the NWS.

NOAA Weather Radio receivers are available in many sizes and with a variety of functions and price. Information for the general consumer is available from the NWS Consumer Information. The key features to consider are:

Alarm Tone – The best radio choice is an “alert radio”. Some radios are simple receivers that do not respond to the alert signals from the NWS. A radio with an alert tone will remain silent until the NWS transmits an alert signal. When an alert signal is received, the radio will produce an audible or visual signal, and then turn on so you can listen to the emergency message.

S.A.M.E. Localized Reception – The best radio choice includes Specific Area Message Encoding (SAME). SAME is a feature that allows your alert radio to produce alarm tones for areas of interest to you. Radios without the SAME capability alert for emergencies will activate an alarm tone anywhere within the coverage area of the NWR transmitter. This will result in alarm tones being activated, even though the emergency could be well away from the listener.

Radios with the SAME feature can be programmed to ignore alerts to certain counties while activating for others. For Waseca County, the listener may want to program alerts for the counties of Waseca, Steele, Rice, Le Sueur, Blue Earth, Faribault, and Freeborn. Once programmed, the radio would ignore other counties, such as Mower. By limiting the number of counties you are alerted to, you will not ignore the alarm tone.

Radios equipped with the SAME feature will need to be programmed for the counties of interest. The instructions for programming the codes will be in the instruction manual for the radio. The six-digit code for Waseca County and surrounding counties are: